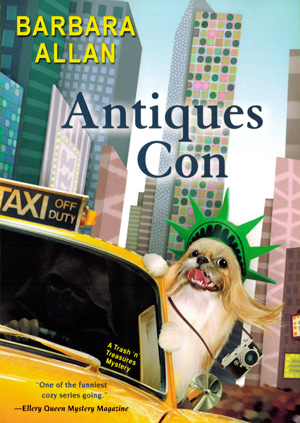 Brandy Borne and her drama-queen mom, Vivian, take their antiques show on the road, for an off-Broadway farce mixing mirth and murder. A world away from small-town Serenity, the ditsy duo—chaperoned by their trusty shih tzu, Sushi—arrive in the Big Apple, blissfully unaware that they will soon cross paths with a rotten-to-the-core killer.

As the dynamic dames descend upon a comic-book convention—to sell a rare 1940s Superman drawing—Vivian makes a show of keeping the valuable sketch locked to her wrist in a briefcase. When an intruder breaks into their hotel suite, they naturally suspect a felonious fan, over-eager to acquire their artwork.

But this not-so-super villain proves less interested in the Man of Steel than in stealing a man's life, as Brandy and Mother stumble onto a murder victim impaled by a pen-shaped award. Suspects ranging from comic-book collectors to crime kingpins lead Brandy and Mother on a merry madcap Manhattan misadventure, taking them from convention hall to strip joint, from retirement home to precinct lock-up. Has the con been conned by a killer? If so, only Brandy, Mother and Sushi can stop this fatally foul funny-book fiend.

Publishers Weekly: “Mysterious deaths follow Brandy and Vivian wherever they go, but these two spunky out-of-towners always manage to find crafty ways to avoid sticky situations in the big city. Tips about comics collecting add to the cozy fun.”

Romantic Times: ****½. “Allan’s madcap series has never been the most typical of cozies; it provides non-stop humor as well as a logical, tangled mystery. Vivian is wildly charming, although she often drives Brandy close to insane. The New York City comic book convention setting gives the story a gentle, satirical backdrop. This is a fun, fast mystery that shows Allan at the top of her game.”