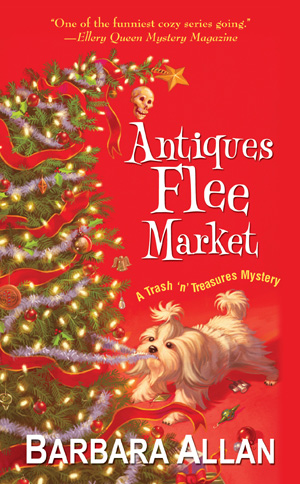 Brandy Borne's new life in the small Mississippi River town of Serenity is anything but serene. Moving back in with her bipolar mom, Vivian—an antique herself, who treats Brandy like a perpetual five-year old—is challenging enough, but stocking and running their antiques holiday booth at the mall together is positively daunting. And as the big Christmas season gets into full swing, they find themselves in the midst of small-town mayhem when an old flame of Vivian's turns up mysteriously deceased. 'Tis the season—to be murdered?

Brandy and her diva mom last saw the recently departed dealer, Walter Yeager, at a flea market where Vivian made her usual theatrical scene while saving Walter from under-pricing a valuable first edition of Tarzan and the Apes. The prospective buyer was furious, and when Walter winds up dead the next day—"officially" of a heart attack—and the book goes missing, Vivian senses a Yuletide homicide.

As the season's first flakes of snow drift lazily down over Serenity, Brandy and her mother—with moral support from Sushi, the decidedly spoiled Shih Tzu—must unearth vintage clues that point to restless ghosts from the town's past. If there's any duo that can tell a fake from the real thing, it's Brandy and her scene-stealing mother. But even though they may know who's been naughty and who's been nice, they'll have to be very careful not to disturb too many ghosts from Christmas past...

Somebody Dies: “...a genuinely funny read...” “...the quirkiest cozy series on the market.”