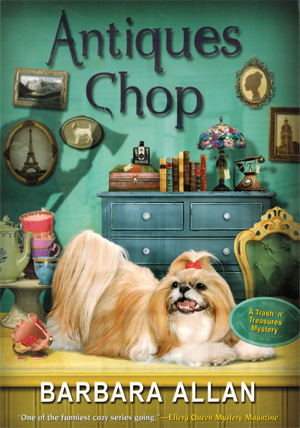 The quaint Midwestern town of Serenity is about to hit the small screen. Brandy Borne and her dramatically ditzy mother, Vivian, will be starring in Antique Sleuths, a reality TV show based on the duo’s antiquarian adventures—and their troubling talent for solving deadly crimes. What better shooting set than a creepy old house, the site of a 60-year-old unsolved axe murder?

The location is perfect until Bruce Spring, the show’s producer, meets a fatal axe-ident, mortally mauled just like the home’s previous owner. The first suspect on the chopping block seems typecast for the role of killer—he was found at the scene of the attack, clutching a stained axe. But as Brandy and Vivian chop around for clues, plenty of other suspects stick out their necks…

It seems the show’s cameraman clashed with Bruce—could he be the culprit? What about the acrimony between Andrew, the harried homeowner, and Bruce, whose dirt-digging documentary all but accused Andrew of the original unsolved crime? And who’s driving that blood-red Toyota that keeps making unscripted cameo appearances? If Brandy and Vivian are going to get to the bottom of this mystery, they’ll have to be extra careful not to wind up on the cutting room floor—in pieces!

Publishers Weekly: “The characters, both primary and secondary, shine with brassy humor, and series fans will applaud Vivian’s reach toward TV fame.”

Bill Crider's Pop Culture Magazine: “a cozy with an edge” “…read the book. You'll have a great time, and you can thank me later.”

Bookgasm: “a quick and enjoyable read with strong and likable characters” “a light and charming tone, with real chuckles and laughs throughout”

Jerry's House of Everything: “Pure fun from the get-go.” “The authors once again pull off an enjoyable, fast-paced cozy, complete with a hobby-like hook (antiques), a pet (Sushi, the old, blind, diabetic Shih Tzu), an attractive heroine (Brandy), an odd-ball character (Vivian), an interesting setting (Serenity, with a full complement of interesting characters), a mystery in the past (Archibald's murder), and a sort-of bloodless murder (well, yeah, chopping someone up is kinda bloody, but the authors don't go in for graphic descriptions).”