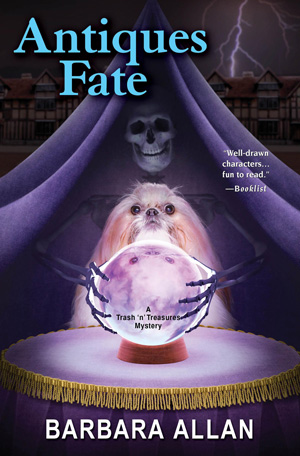 As soon as they arrive in the cozy hamlet, tragedy strikes: the theater owner drops dead onstage while giving Vivian the grand tour. That wasn't in the script and before they know it, Brandy and Vivian are entangled in a progressively perilous murder plot. Besides the cream teas and Chippendale chairs, it seems there are skeletons lurking among Old York's charming pubs and enticing antiques stalls…

When a second victim turns up mysteriously murdered, the dynamic duo knows they've got to step into the spotlight. But the remorseless killer seems to be well rehearsed for the Borne girls…and won't leave even the smallest detail of their demise to fête!

Each new clue points in a different direction. What about this suspicious Club of Eight, a super-secret high-society bridge group that supposedly has very liberal rules about “partners”? When a key witness joins the dead list, Brandy and Vivian know they’ve got to crack this case before the remorseless killer puts an end to their antiquing days—forever!