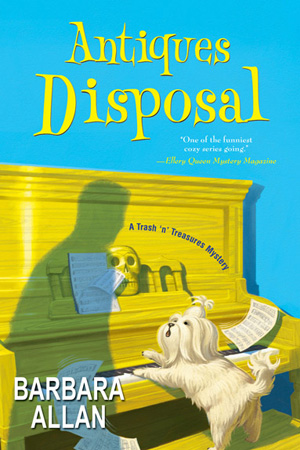 Autumn has descended on Serenity, that quiet, cozy town nestled in the crook of the mighty Mississippi River—or, one might say, with crooks. For the rain and fog have also brought an undercurrent of chaos—and it’s not just because the fall colors clash alarmingly with Vivian Borne’s pantsuits. The only remedy is a trash ‘n’ treasures shopping spree. But the Bornes are about to get more than they bargained for…

Brandy Borne and her suspiciously well-informed mother, Vivian, have the winning bid on an abandoned storage unit’s “mystery” contents, which they discover includes a vintage cornet. But when they arrive to claim the rest of their loot, the space is empty—except for the recently stowed body of Big Jim Bob, Vivian’s tipster—a.k.a. former flame. Only one thing is certain: someone has definitely put the “rage” in storage!

Murder turns to mayhem when an intruder steals into the Borne home, tries to mete out some ruff justice to Brandy’s ferociously fluffy shih tzu, Sushi, and makes off with the cornet. But why is the horn worth killing for? Clues soon lead the sleuthing Borne duo to the next stashed victim—and some of Serenity’s juiciest secrets. Now Brandy and Mother will have to play a perilous game of cat-and-mouse droppings to catch the corpse-hoarding killer before it’s time to blow “Taps” for all concerned…

Booklist: “A humorous cozy that teems with quirky characters.”

Publishers Weekly: “A classic gathering of suspects, under the guise of auctioning off the cornet, leads to an unexpected denouement.”

Pulp Fiction Reviews: “As a fan of hardboiled detective fiction ... [cozies are] not my particular brand of tea...[Deciding I'd take a chance with Antiques Disposal] is probably one of the smartest things I’ve done in a while. Why? Well simply because the book is so damn funny, I honestly couldn’t put it down. And the characters! ... There is a charm and decency to these characters that immediately grabbed me and had me caring for them from page one....if all of the Trash ‘n’ Treasures Mysteries are as wonderful as “Antiques Disposal,” then sign me up for the long haul.”

Bill Crider's Pop Culture Magazine: “very funny...lots of great dialogue...If you've been needing a break from all the noir fiction you've been reading, here's something to brighten your day.”

Mystery Maven: “The characters are memorable, the locations in Muscatine and the Quad Cities lend both atmosphere and (for me) some familiarity, and the banter back and forth between Vivian and every other character is highly entertaining. I’m ready to go back and read the rest of the series.”