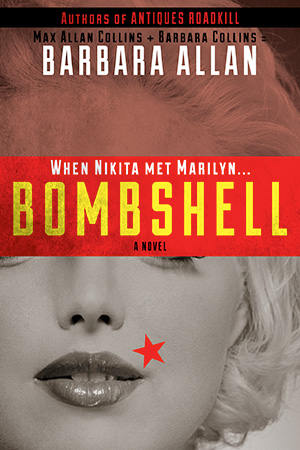 In an attempt to soothe growing Cold War tensions between America and Russia, Premier Nikita Khrushchev visits the US to see all that his “enemy” has to offer. Top of his to-do list? A trip to Disneyland and an introduction to sexual icon Marilyn Monroe.

Thanks to the impossible security requirements, Disneyland is out of the question. Marilyn, on the other hand, jumps at the chance to put on a show for the Russian official. During her appearance, she overhears the details of an assassination plot designed to spark an atomic holocaust and devastate both superpowers. When the Secret Service refuses to believe her, Marilyn risks everything to whisk Khrushchev away to safety—in the happiest place on earth.

With US agents and the KGB hot on their trail, Marilyn and Khrushchev enjoy the thrills of the amusement park while fighting to stay one step ahead of the assassins and prevent the horrors of an unprecedented war that would annihilate millions.

Booklist: “The Collinses have taken an event based in history—Khruschev's U.S. visit—and shaped it with wonderful characterizations (Nikki and Marilyn have never been more interesting) to re-create an era within the context of a delightful comic adventure (a cold-war variation on Roman Holiday).”