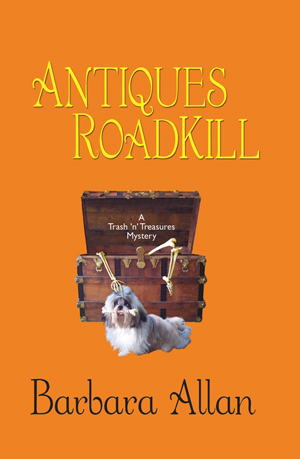 Going home again is never easy—especially when a quirky, high-maintenance Shih Tzu is your most intimate companion—but Brandy Borne is determined to make a new start in her quaint hometown on the banks of the Mississippi. Bruised but not broken, she moves back in with her larger-than-life mother, eccentric Vivian Borne— amateur actress, loyal Red Hat, and world-class gossip—and prepares to get along with her social-climbing older sister, Peggy Sue.

Brandy arrives to find small-town Serenity anything but serene. It seems Clint Carson, an unscrupulous antiques dealer, has swindled Vivian out of the family’s heirlooms. But when Brandy impulsively confronts him, her outburst amounts to about as much as what Carson paid for the Borne antiques. And when Carson is found run over in a country lane near his farmhouse, Brandy has made herself Murder Suspect Number One—with her mother coming in a very close second.

The number of other suspects in Carson’s hit-and-run ruin is impressive—his business seems to have been based primarily on bilking seniors out of their heirlooms. When Brandy and her mother begin poking, an avalanche of warnings follows—from the mysterious, charismatic chief of police, from a handsome young cop who once busted Brandy for speeding…even from Brandy’s childhood friend turned grown-up wild child. Tracking down clues proves even more challenging than sorting trash from treasure at the local garage sales, and when the Borne “girls” uncover a few very unsavory Serenity secrets, they become targets for a murderer whose favorite hobby seems to be collecting victims.

Nancy Pickard: “Cozy mystery fans will love this down-to-earth heroine with the wry sense of humor and a big heart.”

Laurien Berenson: “With its small-town setting and quirky characters, Antiques Roadkill is fun from start to finish. Dive in and enjoy.”